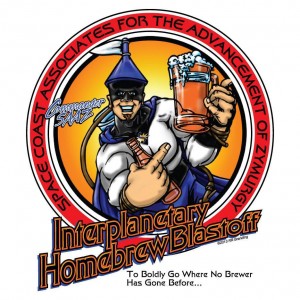 Commander SAAZ Interplanetary Homebrew Blastoff is the homebrew competition hosted by SAAZ every fall. This year’s event will be held October 2nd & 3rd at the Cocoa Beach Hilton. Pre-launch operations are now in progress and Astronaut training has been completed.

This year the Commander turns 21, so you know we will be throwing an EPIC Intergalactic Party!

If you have any questions, comments, suggestions, feedback, want to help this year, pictures to share, anything Commander SAAZ related… please email our 1st VP cmdr.saaz@saaz.org.

ENTER COMMANDER SAAZ  – get all the details here!

Start brewing now for the best competition in the universe! Tell every homebrewer in the galaxy to get their kettles boiling and unearth the bottles that have been stashed in the back of the fridge!  Engineers, rocket scientists, and other cosmic creatures are ready and waiting to judge your brew.

Winners of CSIHB receive not only intergalactic recognition but a coveted Commander SAAZ Medal and a fabulous prize from one of our generous sponsors. The best of show beer and mead/cider winners will also be awarded the Commander’s Cosmic Trophy and the respect of the known brewing universe. Whomever sends the Commander into orbit with their Rocket Fuel (10% abv and above) will also receive the Rocket Fuel Trophy!!!

Tickets for the Commander’s Call Beerfest and Splashdown Party Awards Ceremony are available now.   You don’t want to miss these awesome events and your chance to meet the Commander himself!  Not to mention you can imbibe in this year’s commemorative beer, an English Barley Wine, a high quality rocket fuel for powering your night!